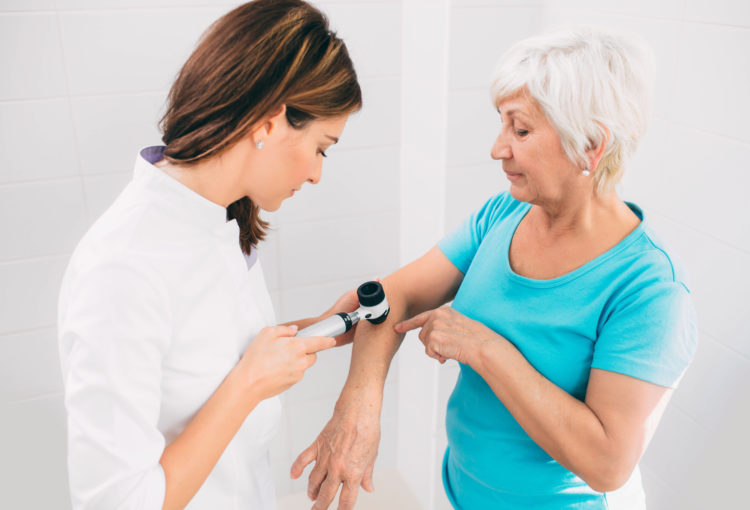 Everyone has moles on their skin. According to Everyday Health, it’s normal to have between 10 and 40 moles. Some you’re born with, while others develop later in life. Most moles appear by age 20, but sun exposure can cause more moles to form or make the ones you already have appear darker.

This poses the question—which moles are harmless, and when should you see your doctor for a mole?

Keep an eye on your moles, and be watchful for any new moles or changes to your existing ones. If you have a family history of skin cancer or atypical moles, your doctor may suggest routine evaluations from a dermatologist.

The ABCDEs of Melanoma

The indicators of skin cancer can be labeled A through E. If you see any of them, contact your doctor for advice.

Moles to Watch Out For

Keep in mind that moles tend to enlarge and stick out, becoming a skin tag in the process. This is perfectly normal and not a sign of cancer. Most moles are harmless and will never cause problems. However, in addition to knowing your ABCDEs, you should also watch out for these specific types of moles:

Why See a Doctor About a Mole?

It’s important to consult with a doctor about suspicious moles because they are often early indicators of malignant melanoma, a life-threatening type of skin cancer. Melanoma is nearly 100 percent curable—as long as you receive an early diagnosis and treatment.

Swinyer-Woseth Dermatology is equipped to examine, diagnose, and remove cancerous moles here at our Salt Lake City office. If you’re suspicious of a strange-looking mole, it never hurts to have it checked out. Call us today at 801-266-8841 to ask any questions or set up an appointment with a board-certified dermatologist.

Whenever you notice a strange lump, bump, or mark on your skin, it can be disconcerting. If you see something unfamiliar, the first thing to do…

Do you have any moles? They’re a very common type of skin growth, and people typically have between 10 and 40 of them by the time they’re 50…